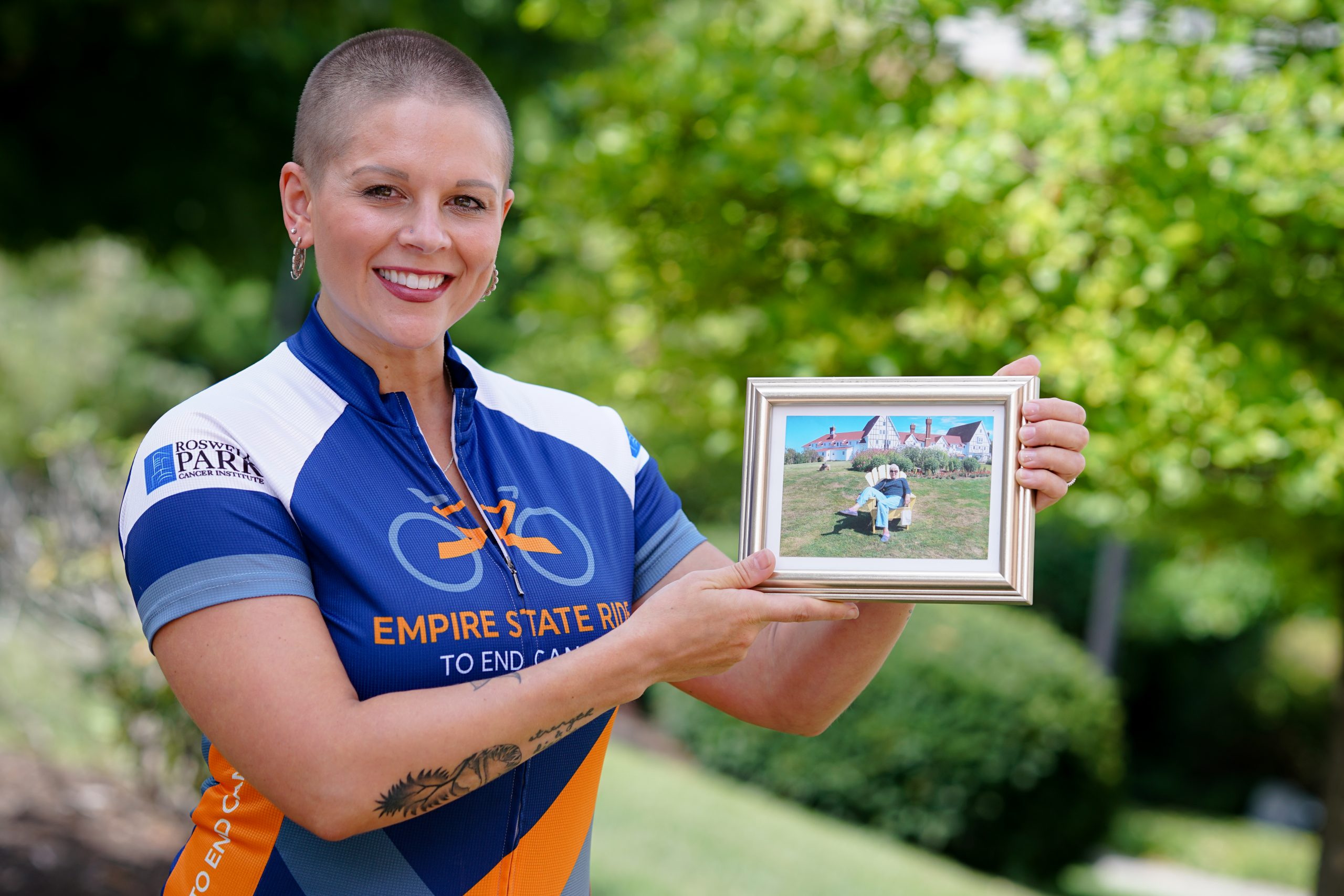 One Woman’s Race to Raise Funds for Roswell Park

Personal trainer and massage therapist Stephanie Latawiec had always been close to her grandmother Theresa.

“She was the kind of woman who had a zest for life like no other person I have ever met,” she says.

“I could never properly pronounce her name as a child, so she became T.T.  to my brother and me. Even as a kid, I remember her always going away on exotic trips overseas and traveling the world. You would find her in her sunroom practicing yoga, socializing with friends and just living the life.”

In the fall of 2016, T.T. developed glioblastoma, an aggressive form of brain cancer. Stephanie moved in with her to help out during this difficult time. That meant she also witnessed her grandmother’s battle up close. T.T. had multiple surgeries, two brain biopsies, gamma knife treatments and a host of other tests.

In November 2017, just days after her 80th birthday, T.T. lost her fight with  this disease. Stephanie wanted to do something meaningful as a tribute to her grandmother and to support other brain cancer patients. That’s how she came up with 52 races in 52 weeks to raise funds for brain cancer research at Roswell Park. “I decided to continue her story since she no longer could,” she says.

Stephanie began her races in January 2018 with the goal of raising $10,000 over the coming year. But before she started, she connected with Team Roswell.

Team Roswell provides support to community members holding their own fundraisers to benefit Roswell Park. The staff was there every step of the way, giving Stephanie fundraising guidance and lots of swag for her events, like including balloons, fliers, banners, giveaways and a special jersey to wear during her races.

When she surpassed her goal in July, Stephanie raised it to $15,000. She credits social media with spreading the word and catching the attention of local news stations. The new Facebook fundraising integration in particular really helped. It’s a great tool that connects her Team Roswell fundraising page with Facebook so supporters can donate to her fundraiser without ever leaving Facebook.

In addition to participating in organized athletic events (like The Ride For Roswell and the Empire State Ride), she has also leveraged community events to her advantage, like a pallet board art project with Buffalo Collective; a 50-50 raffle on a catamaran boat ride at Canalside; and fundraisers with LuLuLemon, Jada Blitz Fitness and Rebel Ride. Many of these businesses matched the participants’ donations. Then there are the surprises, like her friend’s kindergarten class selling cupcakes and another hosting her very own Bald for Bucks campaign — each bringing in more than $1,000.

What is the best thing about these races, according to Stephanie? Still, through and through, her first inspiration.

“Not only have I been able to showcase how wonderful Roswell is in terms of the care that they provide people for the community and those who are affected by cancer, but I really have had  my own healing throughout this year after witnessing my grandmother’s journey. This year has showcased the positive of what happened with my grandmother by turning it into something else. She inspires me. I feel like she inspires other people. She’s the reason I’m doing what I’m doing.

“I hope my donations help create a better quality of life for patients and families who are affected with a brain cancer diagnosis. More importantly, I hope to be able to help fund the clinical trials that are currently underway  at Roswell Park and find a cure for glioblastoma so that no one ever has to hear those dreaded words — ‘You have cancer’ — again.”

PrevPreviousThe Fifth Annual Salsa for a Cure!
NextHow to Start a Facebook Fundraiser for Team RoswellNext

Search for a team